Sure, milkshake beers might be one of the latest crazes in craft beer, but if you dig a little bit deeper, the style is a nod to a couple of things we really like around here at MERIT – exploration of flavours and nostalgia. Not much better than drinking a delicious beer that makes you feel like the first day of summer after school’s out and you’ve got a world of possibilities ahead of you (for the next couple months at least). 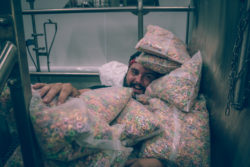 With beer it’s more about painting the wheel a different colour and not always reinventing something. If it ain’t broke don’t fix it… Just improve. We wanted to focus on the creamier side of things so adding Frootloop cereal into the brew only made sense. Nothing beats Saturday morning cartoons and an oversized bowl of your favourite childhood spoonful. We tossed 60lbs of frootloop nostalgia into the brew to see if we could mimic that feeling of sipping the sweetened milk after the soggy loops have all but disappeared. The beer is a 6% creamy thick bowl (pint) of beer like childhood. With a wallop of fresh hop flavour blended with coriander and lactose to push that over the top cereal milk idea. This one is not just for Saturday mornings anymore… But we won’t judge.

Breweries like Tired Hands and Omnipollo pioneered the style and we’ve decided to try our hands at it a few times now. Our first release, Weekends For Breakfast London Fog Milkshake IPA was a nod to the use of vanilla and milk (lactose sugar in the beers case) in both a traditional London Fog and the milkshake style. Our new releases, Fruit Loop Milkshake IPA takes you back to the bottom of the cereal bowl for one last delicious slurp, while the Neopolitan Milkshake Stout pays homage to the OG trio of flavour explosion in ice cream.

So why throw a party called Milkshake day? Because having fun creating flavourful and interesting beer is worth celebrating, and we want to take the chance to remember all of our favourite things about summers past. What can you expect?

There is no cost to admission for Milkshake Day and the event runs during our regular hours: 11:30am – 2am!

– your friends at MERIT 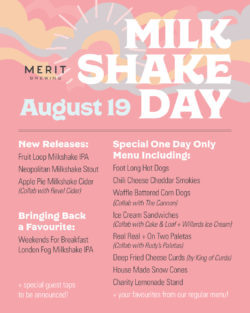