The Quebecers are coming.
We built MERIT’s taproom to be open, communal, and a place to host friends. Well, on November 10th, the Dieu Du Ciel brewing team is headed to MERIT to share some beer and a meal. Actually – a feast. The best part, we’re inviting you to join. Come drink a collection of DDC and MERIT Beers, try a one-night-only menu, speak French or don’t, and hang with the brewers.

Here are the details:

Tap Share + New Releases!
One guest tap won’t be enough on November 10th. We’ll be sharing our taps with DDC and they’ll be bringing some special beers to share with you! What’s a party without some new beers of our own? In addition to a couple of our familiar favourites, we’ll be tapping 2 new releases and the last keg of Real Real (our collab with Jen Nad from Dieu Du Ciel). Full Tap List

Special One Day Only Menu!
When we’re not thinking about beer, we’re playing with our food (Sorry Mom), so it should come to no surprise that sometimes we’re in the brewhouse and food-related ideas just… happen. Well – a long long time ago (okay, 9 months ago) when our brewhouse was getting installed, Spinney and Tej realized that the Kettle/Whirlpool is basically just one giant sous vide kettle. With the ability to set a specific temperature and spin the liquid inside of the vessel, we actually have a 2000 litre pot we could (theoretically) cook in. Now it’s time to make that delicious dream a salivating reality. On Nov 10 we’ll be serving a whole hog menu, much of which will be sous vide in our brew kettle**. The one-night-only menu will include:

There is no cost of admission for the Tap Share & Brewers Feast and the event runs 5pm-2am.

** Sous vide is a cooking method that relies on heated water to cook food that is in a vacuum-sealed bag. All of this happens in a completely sealed and food safe environment, which means no meat will ever come into contact with vessel or even the water inside. 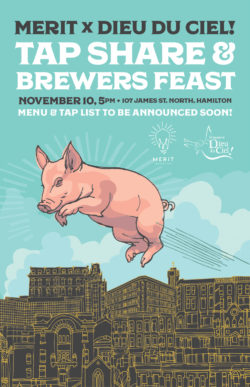