To my mind, and I’m pretty sure I’m not alone on this, when I think sausage, my first choice of pairing is beer. Now, I’m not saying sausage doesn’t pair well with other beverages. I’ve enjoyed high acid Riesling with wurst-loaded choucroute garnie, funky Rioja with dried chorizo, even Champagne with hot dogs. But there’s just something about the combo of sausage and beer that seems natural. Historic, even.

17th century writer Jonathan Swift said, “It was a brave man who first ate the oyster.” Well, this doesn’t quite roll off the tongue as nicely, but I think it was a braver man who first rinsed out and salted an animal’s intestinal tract, stuffed it with meat, then ate the results. Sausage making and curing meats started out of necessity as a way for people to preserve meats before the time of refrigeration. The first recorded mention of sausage comes from the Greek play, The Orya, written about 500 BC. Though the term was probably used to describe any sort of salted or cured meat, the modern word “sausage” comes from the Old French word “saucisshe”, derived from the Latin “salsus”, simply meaning “salted”. Techniques improved and popularity spread. Sausage recipes developed and evolved according to their terroir and culture. In warmer climates, fermented and dried sausages were developed and did not need refrigeration. In the cooler regions of Northern Europe, however, during the colder months, they were able to keep their sausages fresh without refrigeration. These regions had ideal climates for growing grains, and beer making naturally evolved in these areas, as well. In short, one of the reasons why the pairing works so well is because beer and sausage grew up together.

From a flavour perspective, beer works well as a juxtaposition to the fattiness and richness of sausage. All sausage is, to a point, fatty. In my experience, sausage needs at the bare minimum 25% fat to not come out dry after it’s been cooked. Some sausages, like hot dogs, can contain up to 50% fat. With that fat level, we’re looking for something to cut through and refresh our palate. To do that, the main traits we’re looking for in beverage pairing are carbonation, bitterness, and acidity. Beer, generally, has at least two of these, and sometimes all three, and that’s before even considering complimentary flavours. Think of the peppery and clove notes of a Hefeweizen complimenting the similar spices found in a weisswurst; the carmelized maltiness of an ESB accentuating the hint of brown sugar in a breakfast sausage; or the contrast of bright, fruity, citrus flavours of an American Pale Ale against the spicy chili flavours of a Mexican chorizo. When paired with sausage, compared to any other beverage, beer gets my vote. 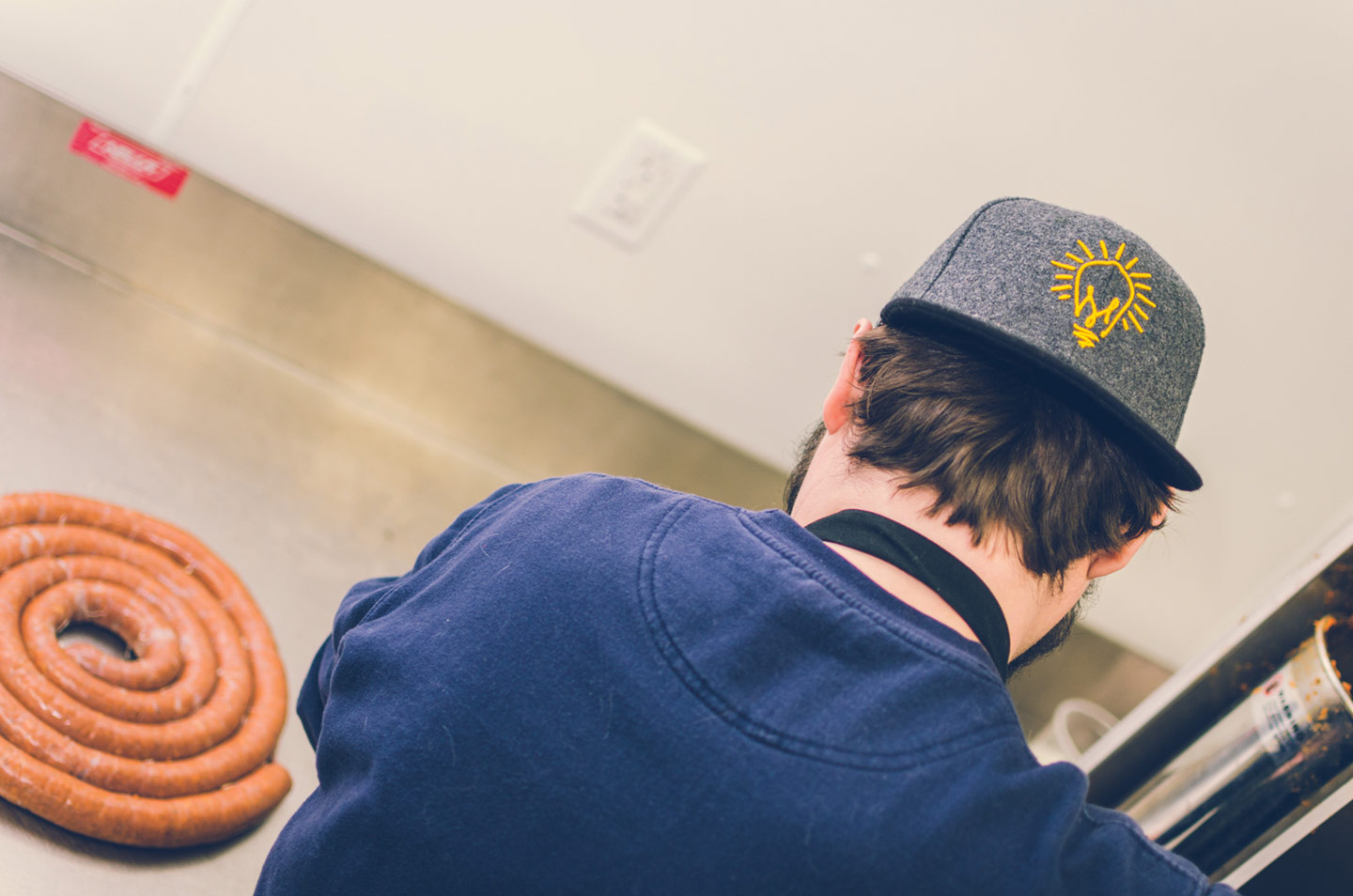 I get asked every now and then how I learned to make sausage, or who trained me. I’d love to have a more romantic story about killing pigs in the backyard with my grandfather, or growing up rinsing out casings and grinding meat in the basement with my mom, but I don’t. I was shown how to make sausage early in my cooking career and realized I had a knack for it. That’s pretty much it. I read a couple of books, too – Michael Ruhlman’s “Charcuterie” and Paul Bertolli’s “Cooking by Hand”, and I’d recommend them to anyone who wants to learn the ins and outs of making fresh sausages.

For me, inspiration comes from different places. My middle name is Reuben, and since I was young, I’ve had a small obsession with reuben sandwiches because of the name. Awhile back, I tried making a sausage with all of those elements of the sandwich – corned brisket, swiss cheese, sauerkraut, rye – and loved it so much it’s become one of my signatures. It could be seasonal, and I’ll get really excited about wild leeks and maple syrup and work that into a sausage. It can also be totally random; I remember a time when I found some leftover harissa rub and had some pork shoulder to use up, so put them together and made a very unorthodox “pork merguez”, and it was fantastic! That being said, when I make sausage, there are three main guidelines I follow. Proper seasoning, proper fat ratio, and keep the mix cold at all times. You can make, and I have made, great tasting sausage with simply meat, salt, and fat. From there, so long as you follow the guidelines, you can look at your sausage mix as a blank canvas and add whatever flavours you like.

At Merit, we’re lucky enough to have a couple of really passionate, talented chefs in charge of our kitchen and sausage program, Sue Littleton and Cale Perkins. We have some great ideas we’re excited about for our opening menu: BBQ Hot Links, Pork Heart Chorizo, Lamb Andouille, and Butter Chicken sausages. They will be paired with the high standard of beer that Spinney is brewing. We want to make great sausage. Not just for Hamilton, not just for Ontario, but we want to make sausages as good as you’ll find them anywhere. We hope you’ll come out and agree.