Three beers to the wind: Past the yardarm and setting sail on the flagship.

As Jim Henson once sang, “It’s not easy being green”. Well the struggle is real, and it’s not easy picking favourites either, trust me, I remember gym class all too well. These days, it’s our turn to pick the teams. Or in this case the beer.

We’ve worked hard and long on this project, and it’s the small details that make the world of difference in the experience. So, for the flagships we wanted to focus on our best. Mom always said, “Put your best foot forward, smile, and always wear clean underwear.” So today we present to you three of our favourites – our flagship brands. Since we’re aiming to brew beers we enjoy and want to share, we aren’t making blondes, reds, and amber beers. Sure, they sell… But what’s the fun in that? Life’s too short for boring mediocre beer. If you look at the shelves of your local artisanal hand-crafted liquor boutique shelves there isn’t room for bad beer. These are our babies, our loves, our passions culminated into a beautiful colloidal solution.

Today my friends, we share with you our three (of ten). Like I said, it wasn’t easy. I digress, and here they are:

In the first blog post I wrote about brewing our first batch. It is our house table beer. This is our attempt at reclaiming the lunch time pint and reinventing the patio sipper. This is SVP, or S’il Vous Plait. At 3% SVP is no heavy hitter in the alcohol department, but packs a flavour filled punch of love. For a 3% beer to be good you need to factor in a few things: ABV, mouthfeel, taste, aroma, and head retention. At lower alcohol, it’s often hard for a beer to taste “big” or not too watery and thin. Using our French Saison yeast and a wallop of wheat, we created a beautiful, creamy, full-bodied baby Saison that some would refer to as a classic Grissette. We call it a table beer. Why you ask? Well, SVP is meant for just that. Sitting at a table amongst family and friends, putting life on pause for a glass or two, and just enjoying those around you. The beer is unpretentious and doesn’t need to be the star of the show, nor does it need to be the topic of discussion, however we’ll talk your ear off about it if you ask.

The second beer (and I guess I’ll do this based on alcohol content and not favourites since I love em’ all) is the beer that might be most dear to our hearts. “Chanan” is the brain child of my best friend and partner Tej. He whipped this little puppy up about a year ago and my jaw dropped when we tasted it for the first time. The beer is a dry hopped saison with Indian coriander and fresh orange peel. It’s a beautiful display of balance and juicy love. It’s a beaut Clark! The beer itself, like I said, means a lot to us. Chanan is the name of Tej’s grandfather who is the inspiration and the reason for MERIT as a name. He’s one cool guy who works harder than anyone (at the beautiful youthful age of 96) and is the one of the kindest humans I’ve ever heard about. He’s a real gem, so this beer had to represent one of the best. I just hope I can deliver and strive to represent a living hero in a glass. This beer is a 5.3% ABV Saison brewed with wheat and pilsner malt. It’s a classic style that we mixed up a bit by adding Indian coriander, fresh orange peels, and new world hops. Compared to generic coriander, Indian coriander is not only an amazing throw back to Tej’s roots and love of exploring Indian culinary techniques, but it’s far fruitier and has a full bouquet of citrus, black pepper, fruit loop flavour (I know you love em), stone fruit, and spring flowers. It’s cracked just slightly to release it’s flavour and aroma during the boil and man o’ man does it ever play well with the hops and oranges in the beer. The hops are also more aggressive in terms of aroma and flavour. With varietals such as Simcoe, Amarillo, and Mosaic, they blend together to create a beautiful bouquet and flavour within the liquid. We add the hops late in the boil so the fruity floral character really shines through (not just raw astrigent bitterness). This beer will be on display in our bottle shop in 500ml bottles, 2L Growlers, and will be on draught at our brewery. We’re really excited to show you this one!

Last, but surely not least, we present our 6% Young Rival IPA. Now these days you’re probably saying to yourself, “Wow, cool, great…another IPA.” It’s like the caesar salad on a menu at a roadhouse diner. It’s gunna be there if you look. But that’s just it, to us it’s not a space-filler. It’s my favourite style, period! If you come in preaching that IPA’s are a trend and won’t last… I will refer to the years of articles claiming IPA’s will fade and are just a gimmicky trend. Well.. you’re wrong! Wrong I say!

So what do we call a beer that’s entering a “crowded” category of beers? Say hello to “Young Rival”, world! “Young Rival” reflects Hamilton’s position as a burgeoning city in Ontario. There is a determination that comes with being a Hamiltonian. It also reflects MERIT’s position in the brewing industry, as a brewery lead by a young team that is determined and unwavering in its goals and values. For many Hamiltonians, the name might sound familiar already. That’s because Young Rival is also a band from our fair city that is comprised of three of the most genuine, talented, and creative people in the industry. They’re a band that has always flown under the radar. Beloved amongst some of the most well-known bands in the country, their success remains as humble as the 3 members. The beer focuses on hops but is complimentary to the simple malt bill (with no Crystal or Caramel malts) that lends itself beautifully to an unforgiving head as well as a nice smooth balanced mouthfeel. We use El Dorado, Mosaic, and Amarillo hops. To you those words might seem like silly things to say, but to us they are beautiful colours to paint with. This is our art, and we love using colour. The IPA boasts huge notes of cantaloupe, peach, mango, pine, fresh meadow, spring mornings, and warm hugs from your favourite aunt. To someone who isn’t into bitter beers, this still might be for you. It’s not harsh or astringent. It’s delicate and fruity. It drinks like adult fruit punch. You’re probably going to love it. Like “Chanan”, this’ll be available in the bottle shop in 500ml bottles, 2L growlers, and on tap. 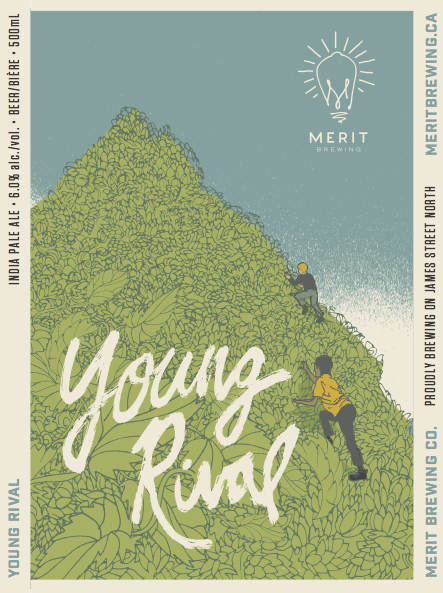 So friends, until the day comes (and it’s coming fast) that we can share these three beers (and more) with you. You’ll just have to wipe up that drool from your keyboard and quickly think of something far less salivating. We will continuously perfect our recipes and cannot wait to share these creations as we grow older with you – because you never grow old around the dinner table….